For the past 2 years, Malminderjit Singh has been editor of The Birthday Book, an annual publication that puts together diverse views on our collective future.

Malminderjit and his friend Aaron Maniam first saw the need for a platform for emerging voices to share their views on Singapore and they felt that as Singapore matures, beyond SG50, it was important to engage a cross-section of people to help shape the country’s future. From here, The Birthday Book came about as a compilation of essays from people who have an informed and interesting view on Singapore who were given a single question to answer.

In 2016, the 51 contributors – congruent to Singapore’s age then – and all of whom were under the age of 45, answered the question “What is Singapore’s Next Big Thing?” In 2017, to elicit a broader and deeper response, the 52 contributors, who were invited from diverse age groups, wrote on “What Should We Never Forget?” Proceeds from the book sales go towards the production and publishing costs, as well as to The Birthday Book Collective, which is operated in the spirit of a non-profit to support follow-up activities and outreach relating to the various ideas and causes that the contributors wrote about. Revenues raised are also used in engagement towards schools and young Singaporeans through book sponsorships, workshops and talks. 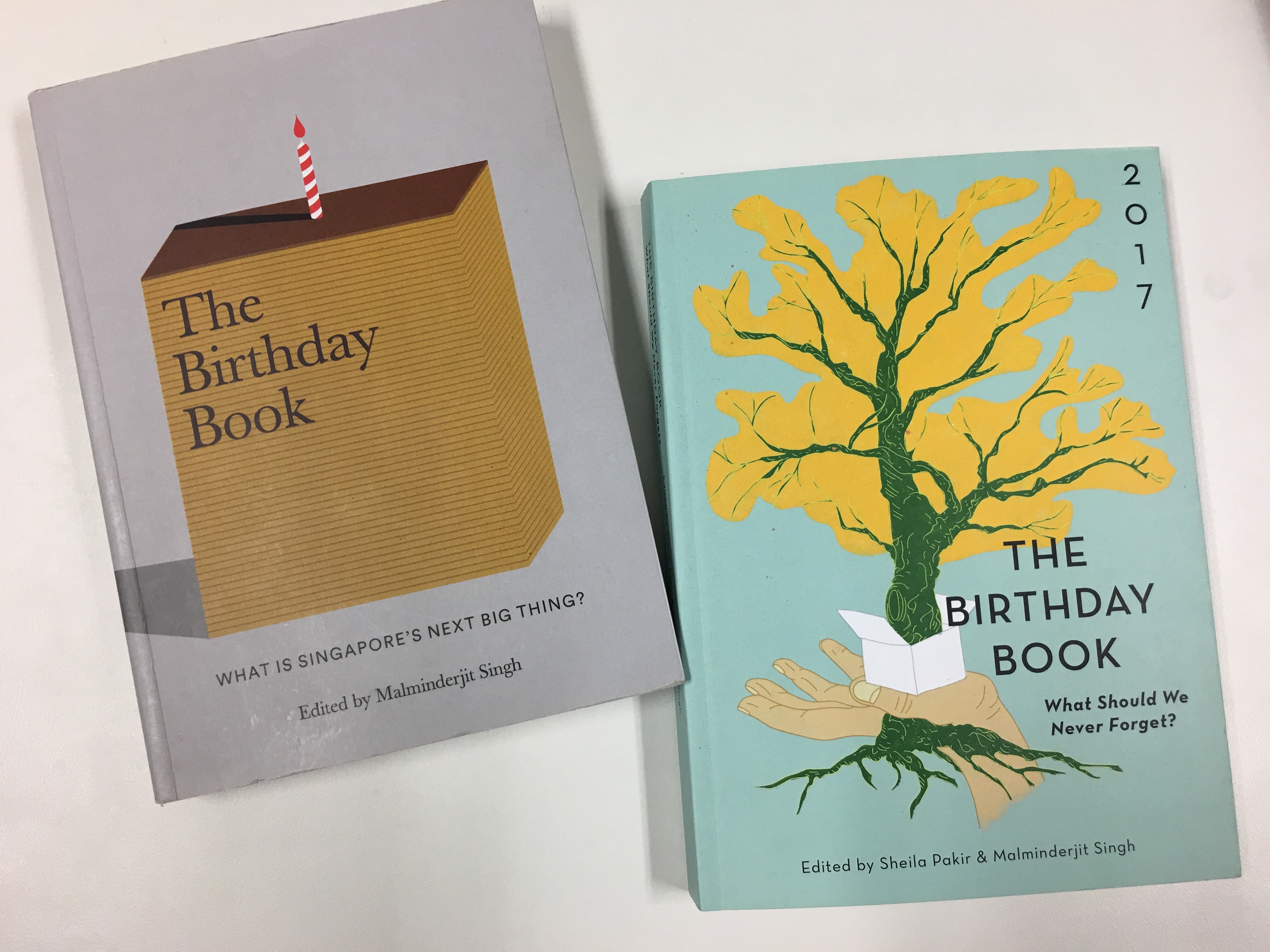 From these questions, the essays provided by writers that comprised of individuals from a variety of industries, backgrounds and experience were compiled into themes that formed the chapters of the books. Such an approach, while bold and leaving much room for a hodge-podge of ideas, seemed to have worked out beautifully as the books can truly claim to reflect a ground up view of what matters to Singaporeans.

Not satisfied with releasing the book alone, contributors from both books were brought to speak to students of schools around Singapore to share their hopes and dreams with the future generations and hopefully inspire the next wave of leaders.

In the 2016 edition, Malminderjit wrote a hypothetical future news article, dated 3 years into the future as he crafted a scenario of how Singapore was reaping the benefits of its soft power in the region having educated many of the region’s leaders. The article served to highlight the importance of Singapore’s soft-power in advancing the nation’s influence on the regional and global stage as well as its managing its foreign policy interests, as he argued that educational institutions here, having attracted many leaders from the region will play a crucial role in the country’s future. Besides Malminderjit, the 2016 edition also saw a contribution from Sheila Pakir, whose father, the Late Mr. Pakir Singh, established SHATEC and has been credited for the development of Singapore’s hoteling sector, among other accolades. Sheila went on to co-edit the 2017 volume with Malminderjit.

For the 2017 edition, another young Sikh – Alisha Gill – also contributed to the volume co-edited by Malminderjit to share her thoughts on how each of us can do more to suspend judgement and remind ourselves to be deliberate on knowing our own faults before finding the same in others.

Of course, the arts were not left unrepresented in such compilations. In 2016, Rishi Budrani wrote about how he viewed Singapore’s current stage of growth similar to that of a teenager trying to develop a sense of individuality and that where the arts were concerned, it was important for the state to place more trust in society to make the right decisions. An altogether serious suggestion by one of SIngapore’s favourite comedians! Singaporean poet, Joshua Ip – the recipient of the 2017 Young Artist Award, the founder of Singapore Poetry Writing Month and the driving force behind Sing Lit Station – was another arts personality who contributed to The Birthday Book in 2016.

The 2017 edition had an entire section of essays that indulged in topics on our heritage and history, and how we can draw lessons from our culture for the future. Among them, eminent literary personality Alvin Pang wrote about how we can do more to appreciate and harness the rich cultural history on Singapore’s past with an abundance of writers and artists while another poet, Theophilus Kwek, wrote about the importance of Singapore making brave and bold decisions.

The books have not gone unnoticed in Singapore. Besides selling thousands of copies each at major bookstores, both editions had extensive media coverage with several newspaper articles covering the variety of essays and ideas in the book. In less than 2 months of its launch on August 27, 2016, the book had sold 80% of its printed stock and already had its second print run underway. The book had also triggered writers to meet in smaller groups to discuss collaborations and how to take their ideas further! The 2017 edition had several essays published in mainstream newspapers including the Straits Times and Today, while several national level organizations presented them as Singapore-specific gifts to regional and global platforms. Even Prime Minister Lee Hsien Loong posted about the commendable ground-up effort of the team to engage young voices here to participate in Singapore’s future. 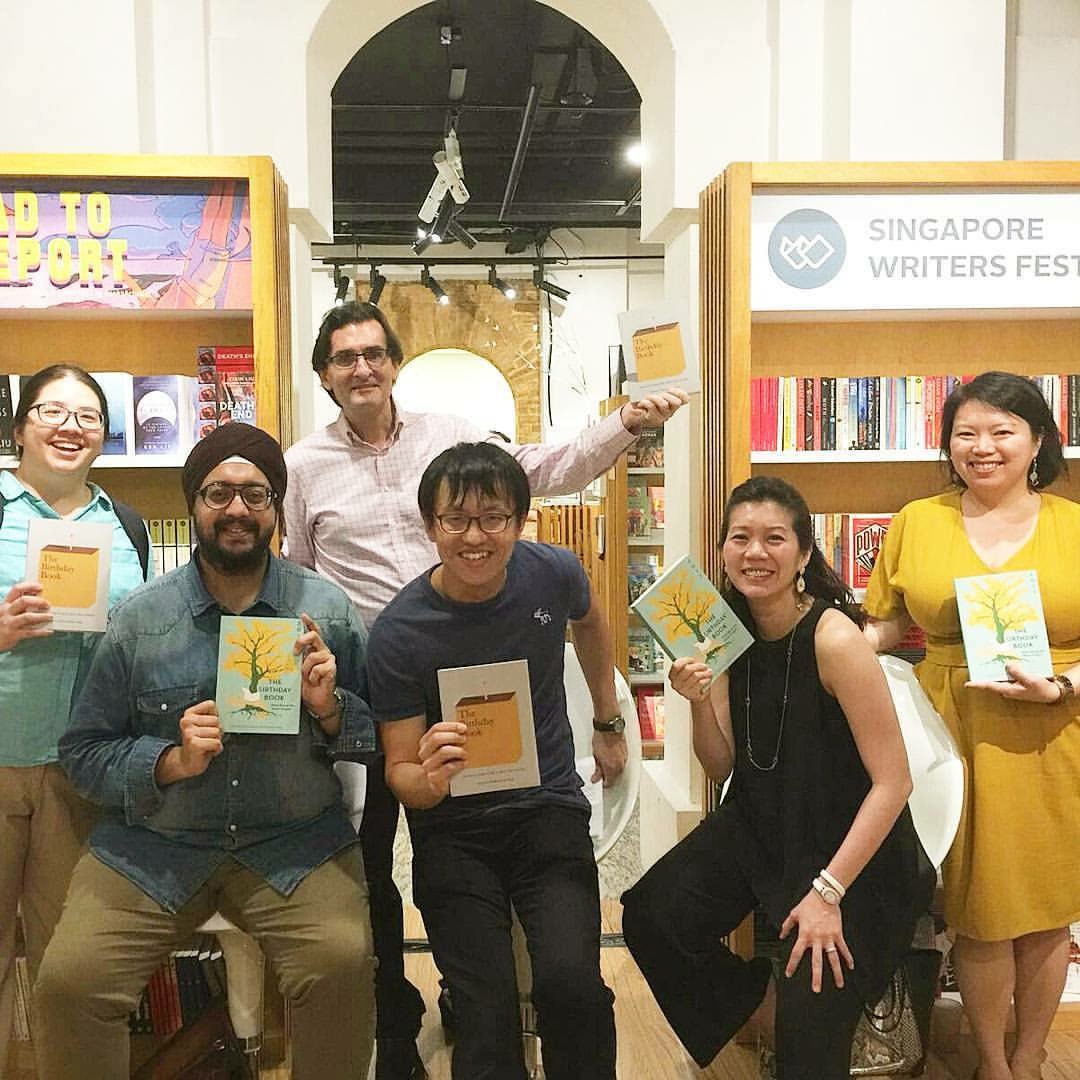 When ask about how Malminderjit thought the book could help our community in Singapore, he shared that it was relevant on several fronts. From a macro perspective, the book and the Collective were examples of ground-up initiatives and it was important that members of the community look to harness such grassroots initiatives as well, regardless of what they may be, as wider participation would help create a more plugged-in community that could solve its challenges.

Secondly, he said that it is important to highlight that many of the people driving the book and Collective efforts were ethnically minority Singaporeans. This, he hoped, would encourage young Sikhs to never shy away from participating in and contributing to national efforts. “It is important for all Singaporeans, no matter their ethnic, religious or socio-economic backgrounds, to dream big and to be vested in and contribute to every level of Singapore’s development. Do not let any of your circumstances hinder you from doing so.” Further, young Sikhs must refrain from being apathetic and fully participate in their country’s and community’s matters. For a start, they should be well-informed of diverse and critical perspectives so that they can contribute effectively to society. In this regard, he would like to see young Sikhs in Singapore read more as it helps shape an informed, thoughtful, persuasive and imaginative community. Cheekily, he suggested that The Birthday Book would be a useful starting point as “its diverse make-up ensures that there is something in there that appeals to all of us no matter your thematic or genre interests”.

When asked what advice he would give to those interested in editing and publishing their work, Malminderjit said that it was important to always have an audience in mind. “While it is important to be imaginative, it is always useful to ask who you are doing this for and how it would sound like to them. When writing, it is always easy to get caught up in your own thoughts that you sometimes lose sight of the intended outcome.” Having edited five books and contributed to several, Malminderjit shares that the biggest lesson he has learnt is to start early. “Procrastination is the biggest obstacle from being published. If I had been more efficient than I am, I suspect many of the ideas I had would have been on bookshelves now rather than being in the bin.”

An honest and sobering reflection from a young Singaporean who thrives in bringing candid and thoughtful perspectives to the fore.