Born Rajvinder Singh, “Rajay”, as he is affectionately known, has come a long way in his pursuit of the arts. Not only is he an established musician, he is also a much sought after craftsman who gives his work willingly for charity auction. We had a chance to catch up with Rajay to find out more about his journey that will surely inspire many. 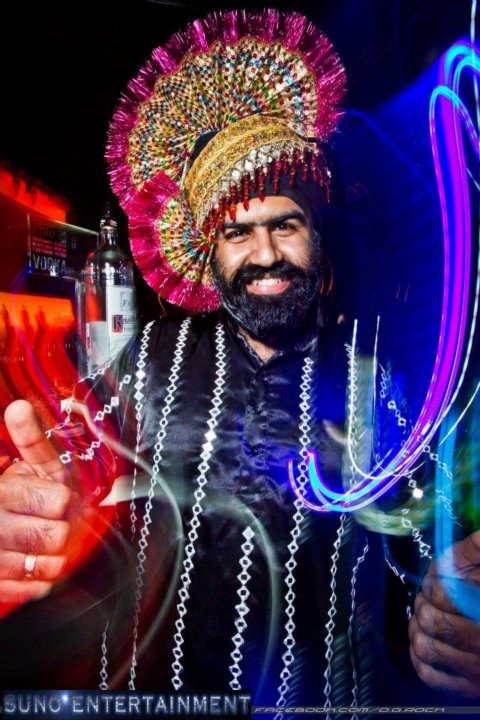 Rajay and his older brother, Harpinder Singh, were fans of the bhangra music scene in the 1990s and early 2000s. With artists like Malkit Singh and Sukhwinder Singh as well as groups like B21, Apna Sangeet and Punjabi MC pushing out great songs with amazing dhol beats, the brothers rallied their courage and asked their father to let them take up playing the dhol. While there was some resistance at first, eventually, their father bought them a dhol to share in 1997. Their father’s only requirement – be the best and play to a level that people would respect you.

The brothers had no musical training or teachers to guide them. All they had were their discmans and their dhol, and that was enough for them to slowly learn by listening to bhangra songs and practicing tirelessly to get the beats right. They were fortunate to also have an uncle who was active in the local neighbourhood Community Centre and Resident Committee activities. The brothers would be asked to perform at these events, which was where they built up the experience of playing in front of large audiences. 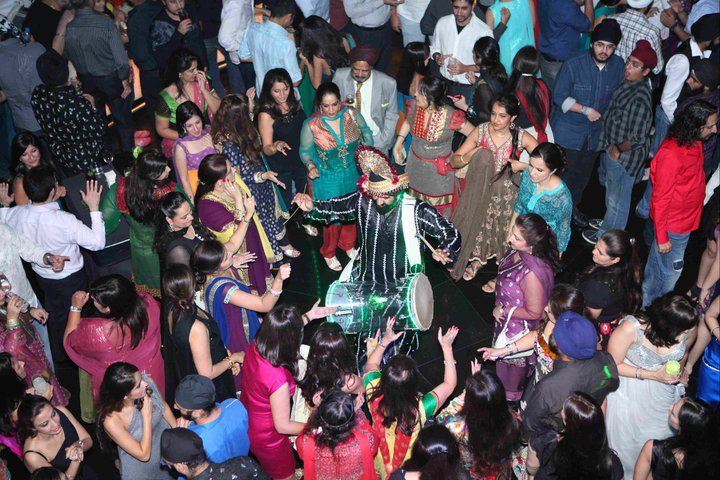 One night in 2008, while Rajay was dreaming as usual about Bhangra, he had a vision of himself performing with a dhol that shone like a beacon. The dhol had lights emanating from it and he knew that this was the beginning of a major evolution to his performances. His engineering background came in handy (Rajay currently works as a System Engineer at Singapore Technologies) as he quickly ruled out flourescent bulbs and made a trip toSim Lim Tower where he found strips of Light-Emiting Diodes (LEDs) that could be fixed onto the dhol along with a 12V battery. And so it was on Diwali night in 2008 that Singapore, and even the world, first saw “Lightning Dholi Rajay” give his inaugural performance at the then DXO club at the Esplanade. 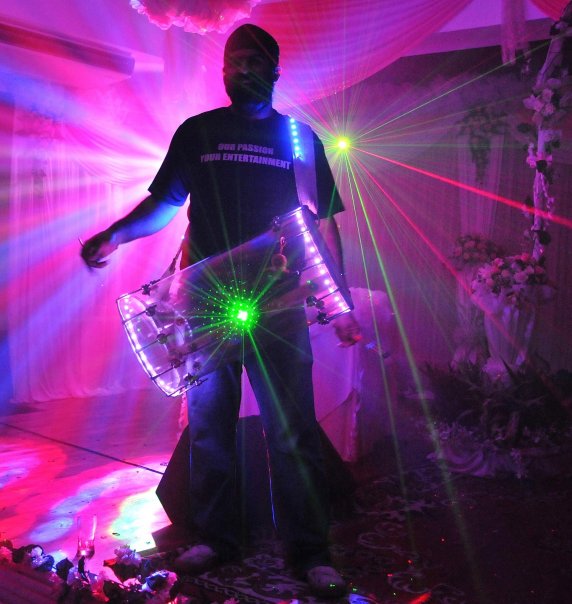 When asked how he came up with “Lightning” as his moniker, he shared how he was inspired by his secondary school hockey club days where his team from Yuhua Secondary were called the “High Flyers”. No other school had a nickname and he felt that the pride his team had was something intangible that no one could take from them. Similarly, he felt that being just another great dholi was not enough and that creating an exciting persona would raise his profile in the scene.

Over the years, Rajay has performed with pretty much all the bhangra groups in SIngapore, but the first was Bhangre de Sitare (BDS). Together, they have performed at various events and venues, including at the National Day Parade in 2001. 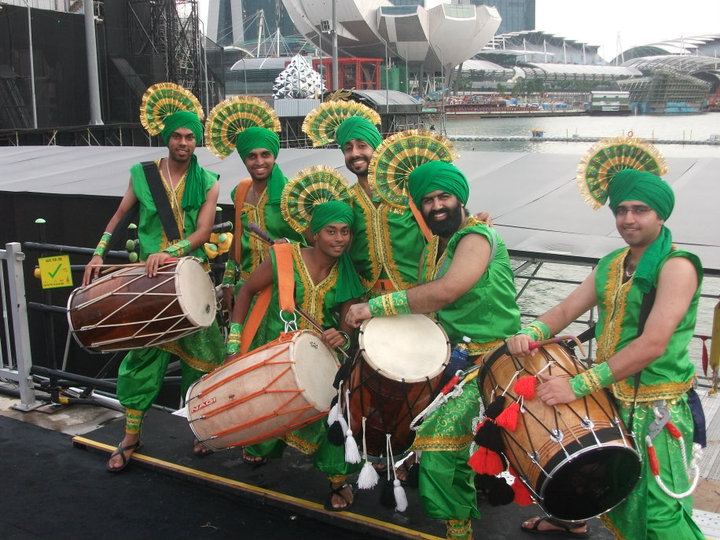 Rajay with dholis from various bhangra groups at YOG 2010!

Rajay’s first overseas gig as a dhol player came in 2006 when he performed in Bangkok, Thailand. The year after, he performed in Bali, Indonesia, and since then, Rajay has performed at destination weddings, corporate events, percussion or drumming festivals and awesome parties and concerts all over the world in countries like Chile, China, Australia, India, Myanmar and even Guam! 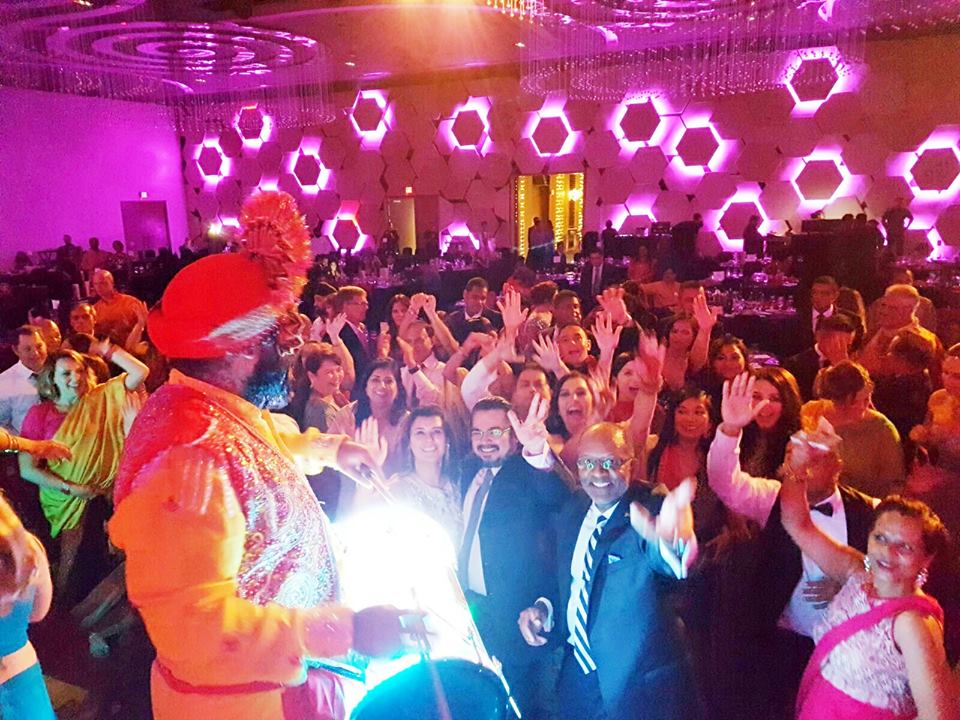 In addition to his solo gigs and performing with bhangra groups, Rajay also played with dhol groups. The first was when he formed the Singapore Dhol Squad by gathering dholis from various bhangra groups together. 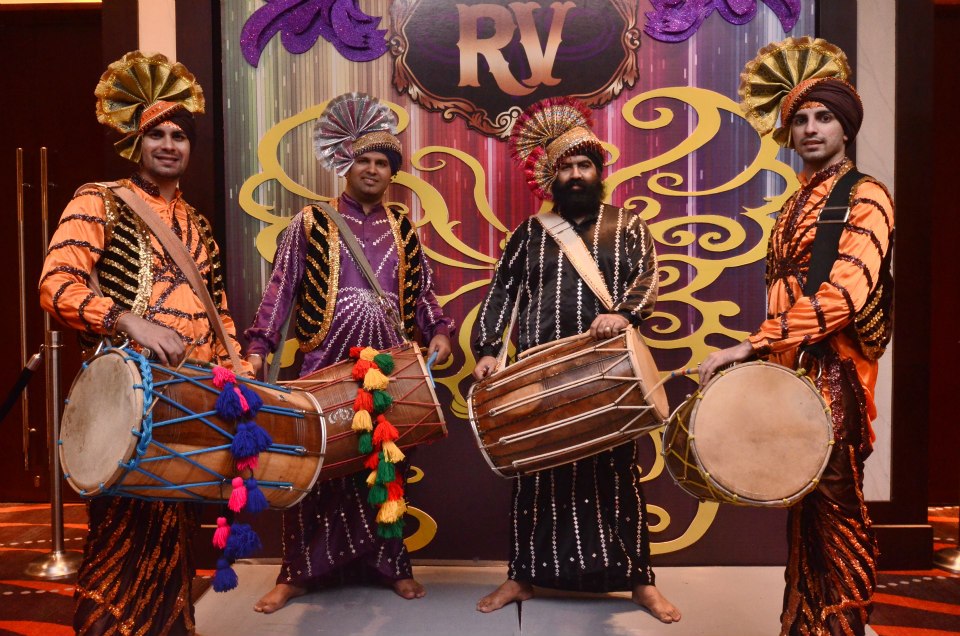 Rajay has had many highlights in his performing career, especially after having performed with many famous singers and groups, including RDB, PBN, Mika Singh, Pritam SIngh, Sukhwinder Singh, Sukhbir Singh, Badshah and Punjabi MC! However, among them, a standout memory was when world-renowned Dholi Gurcharan Jit Mall of UK-based Dhol Blasters gave him a dhol in 2002 during a bhangra night organised by Apna DJ, DJ Bobby! 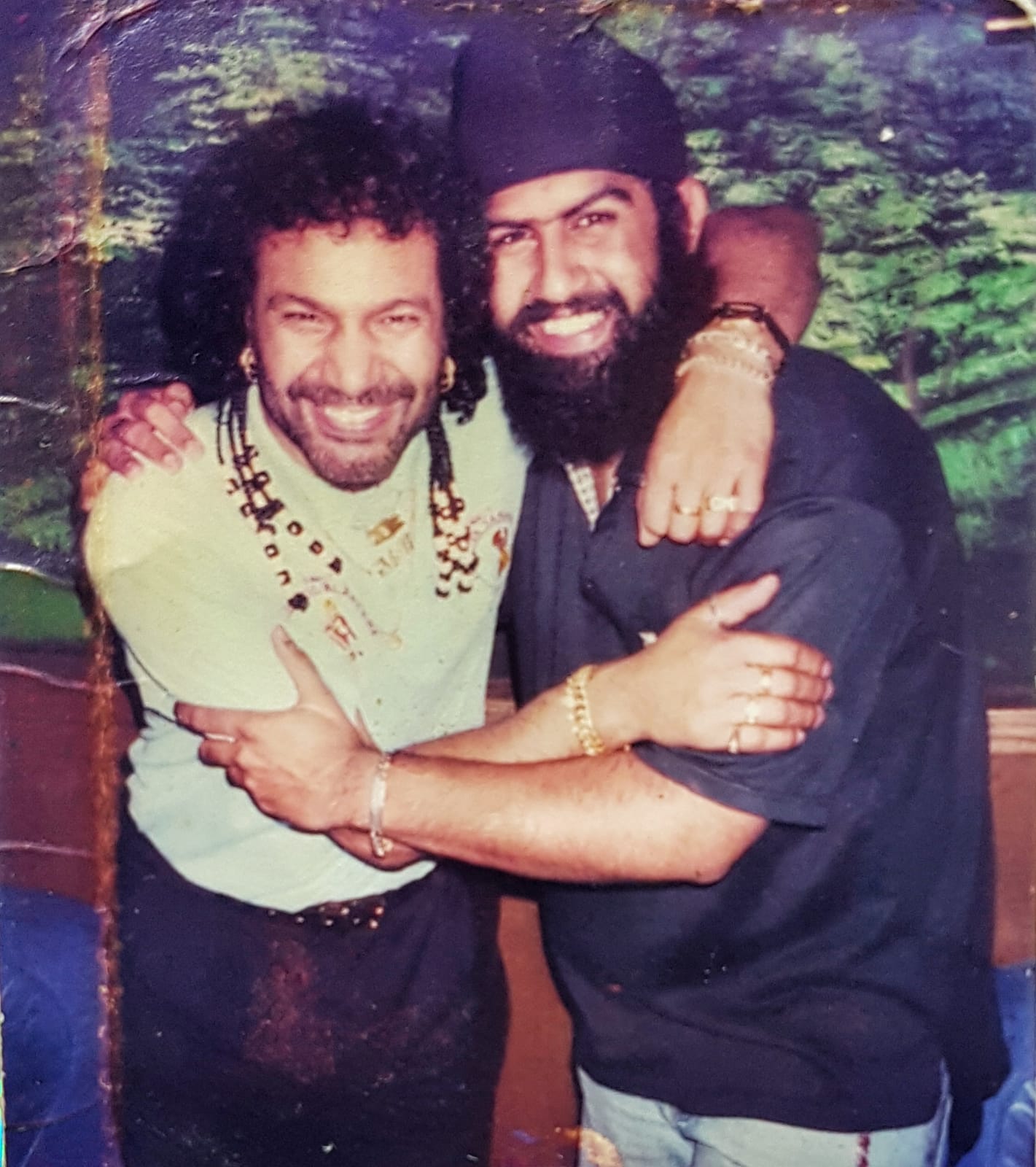 Rajay’s performance in Manila in July 2012 with Navi, the world’s best Michael Jackson impersonator who acted in a film as Michael in 2017.

Regardless of his fame or success on the stage, whenever Rajay felt down or had not performed his best at a show, his father Amar Singh had been there to offer advice and support. His father also shared wisdom and when Rajay complained that some performances were nowhere near perfect, his father told him, ”The day you do a perfect show, that will be your last, because nothing you do after will ever compare.” 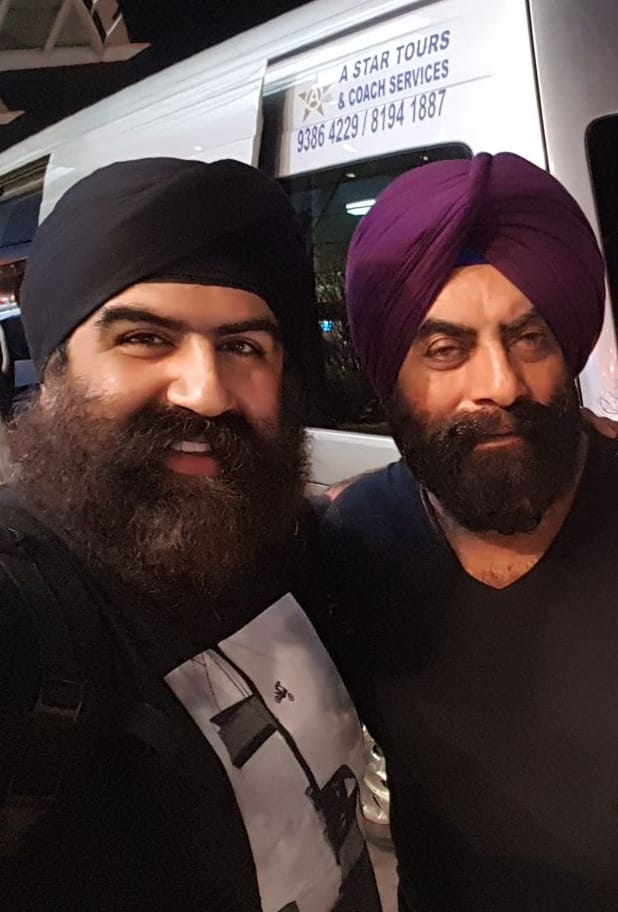 Rajay and his Dad.

After all these years, Rajay’s passion for the dhol has not wavered. In fact, he has been giving classes to budding dholis since 2005! However, not every student treats their teacher well. In 2011, a student attempted to patent a lighted dhol and tried to sue Rajay. Imagine the heartache Rajay must have felt and the torture of being prevented from doing what he loved. Thankfully, the legal matter was not pursued by the ex-student and Rajay did not allow that experience dampen his spirit!

Rajay has also been coaching the Singapore Management University’s Samba Masala team for about 4 years. Working with the university students makes Rajay proud that our culture is being celebrated and presented on the big stages around the world. Believe it or not, they have 10 girls playing the dhol! 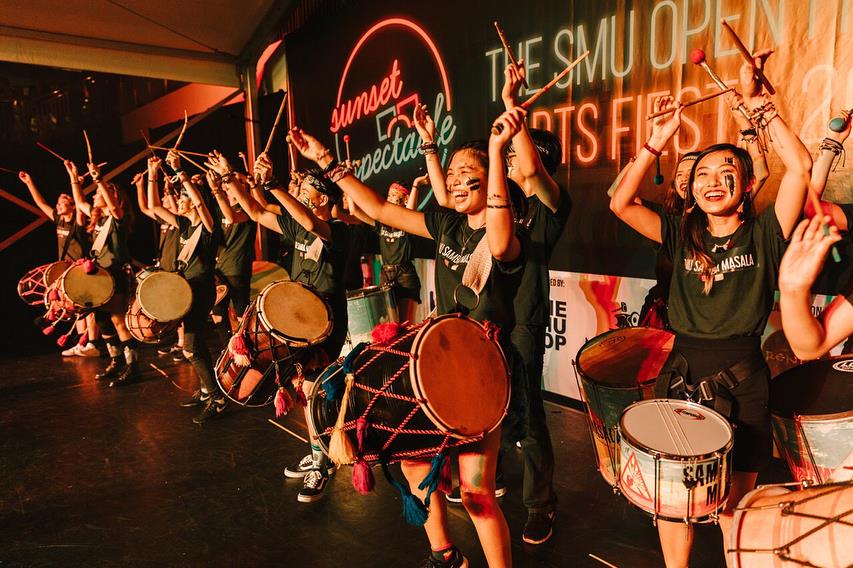 If you thought all of that was enough to keep him busy, you’re in for a surprise! Rajay is also a passionate pyrographer! Since 2007, Rajay has been making pieces of art under the banner of Inferno Woodwerkz. 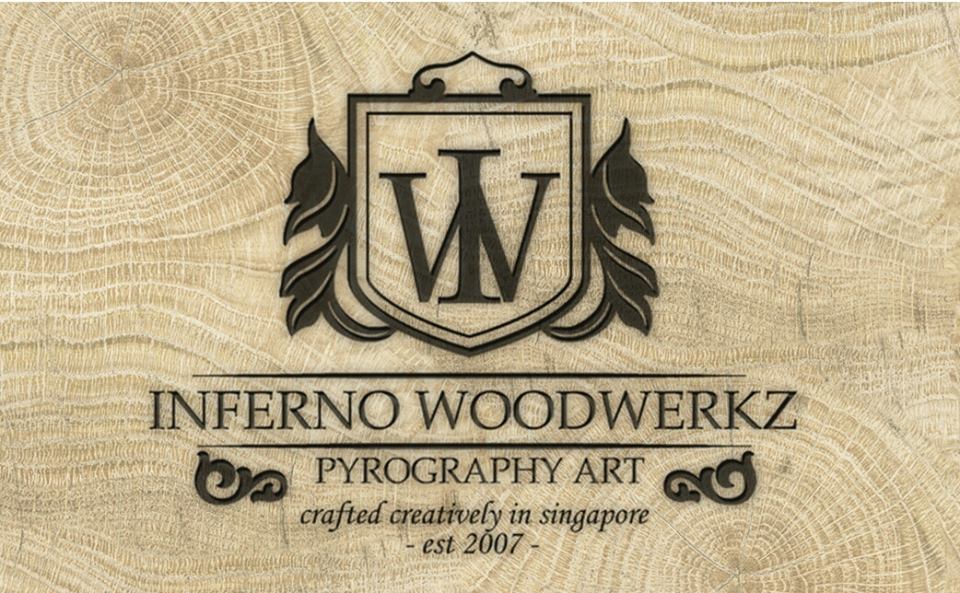 As an art student in secondary school, Rajay was fascinated by the play of light and shadows on objects, and how artists could interpret such play into their drawings. As he explored further into various artistic techniques, he discovered pyrography where people use of a solder to burn lines into wood to create carvings. Eventually, his interest grew into a serious project for his O Levels art examination! 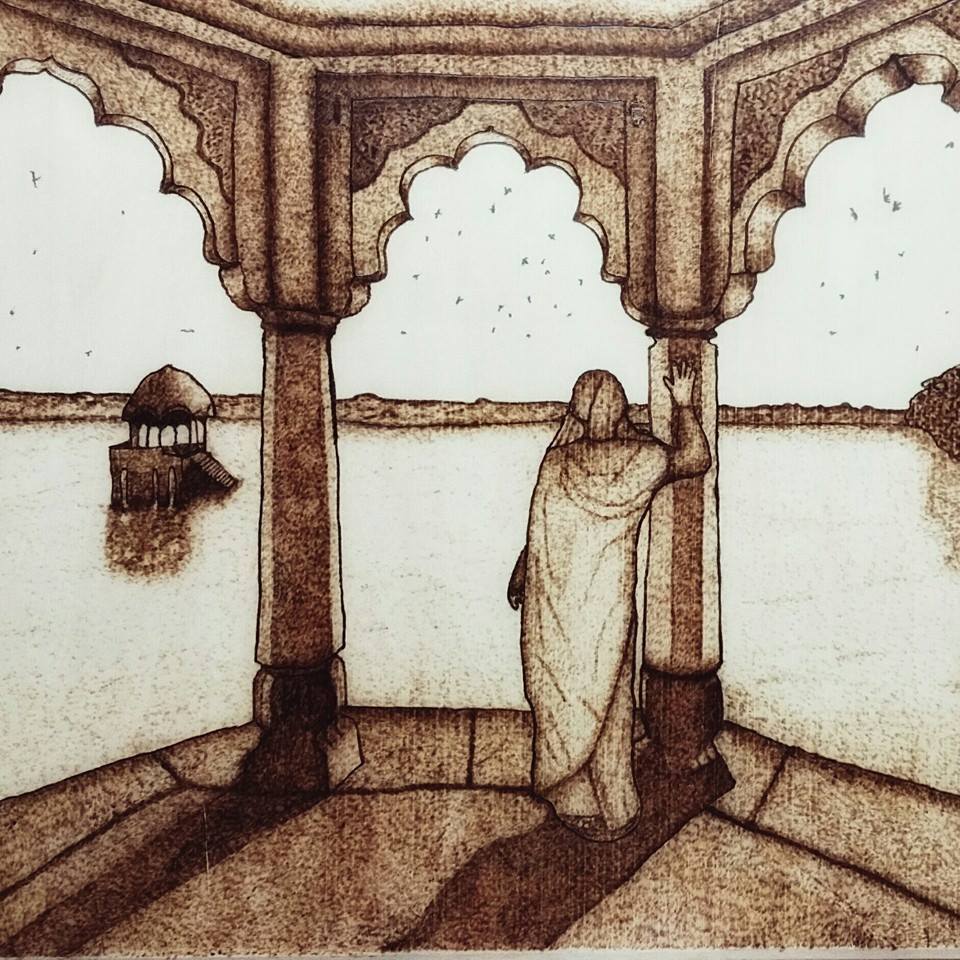 While Rajay did not continue pyrography immediately after school, it was five years later when he thought of revisiting his interest to help raise funds for the then Singh Sabha Youth Wing. Rajay went back to his tools and managed to craft a piece that raised $3,000 during Vesakhi in 2007! 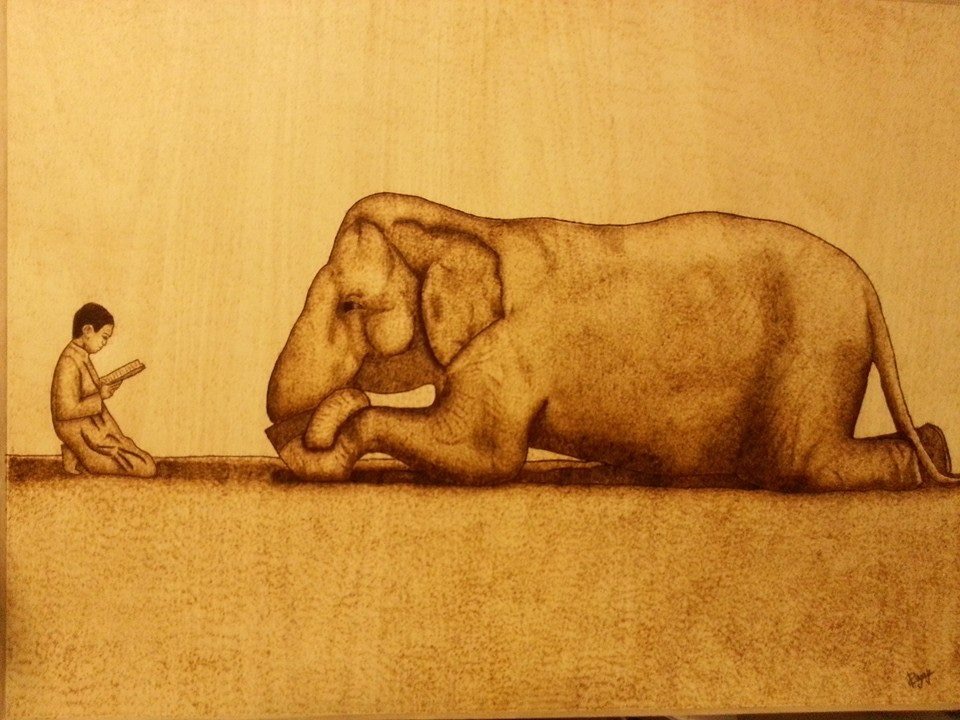 From then, Rajay had only done a few pieces for similar causes for various activities in the community. Then in 2013, with some encouragement from his wife, Mareenjeet Kaur, Rajay took it up seriously and has since been regularly providing pieces of art for auction at various fund-raising and charity events, including raising funds for patients suffering from “Butterfly skin syndrome” and events organised by Moshi Moshi Bollywood. A lot of time and effort goes into each piece, with each A2 size Balsa wood piece taking about 3 hours a day for 3-4 weeks to complete! Rajay also shares how lapses in concentration or tiredness could lead to burns from contact with the soldering iron or even singeing his beard! 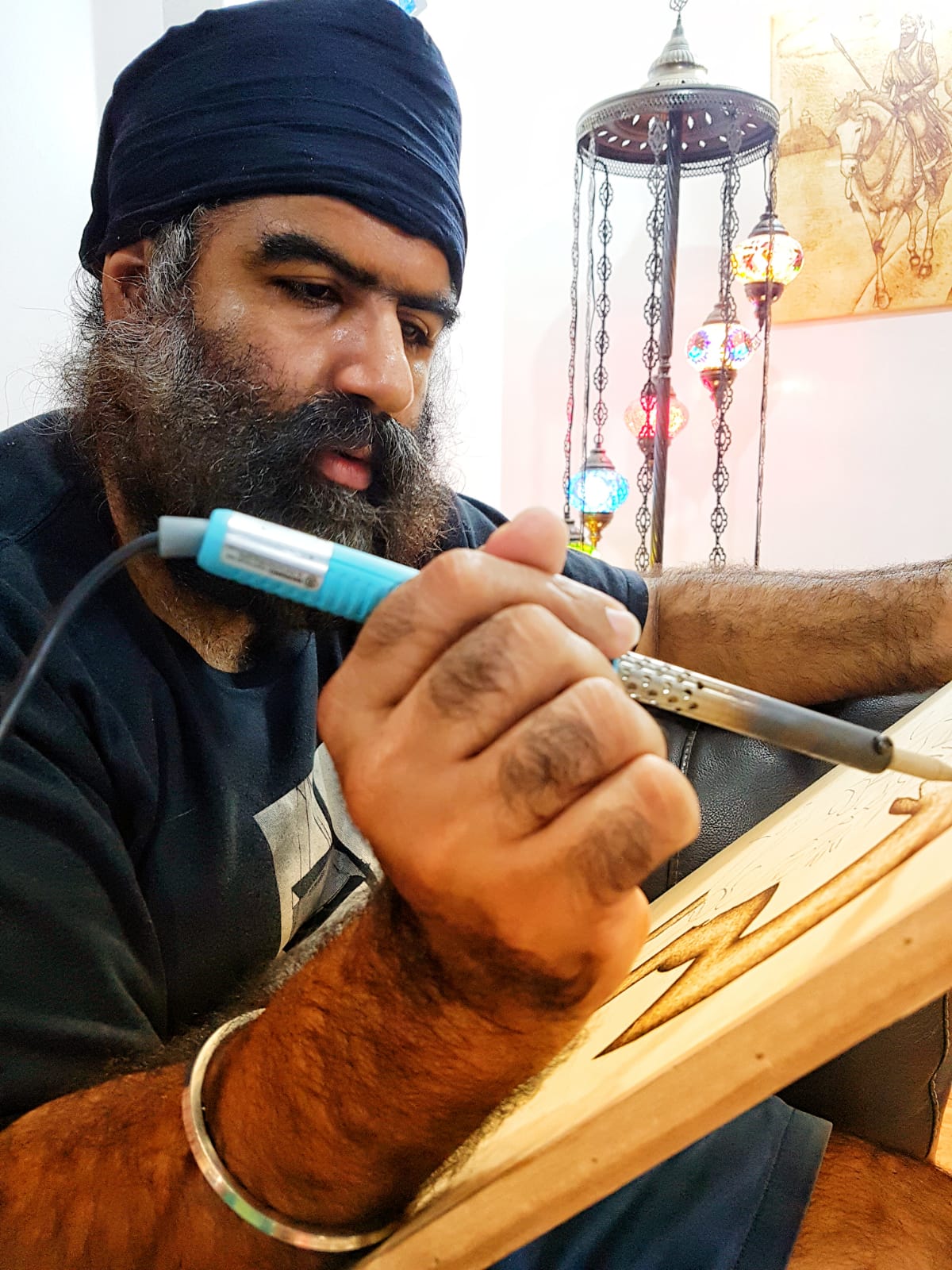 It seems that Rajay’s talents are limitless. There are many lessons we can learn from his experience and his dedication to the arts. His desire to excel and to share his talent with everyone with a smile and a lightness in his step truly embodies the spirit of Chardi Kala! All the best Rajay and we look forward to your next great endeavour!

Unless otherwise stated, all photos taken from Rajay’s Facebook page and profile.